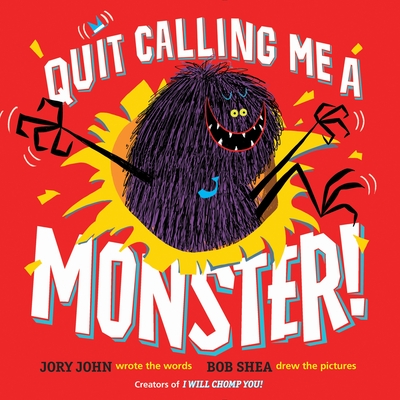 The talented creators of I Will Chomp You! brilliantly frame the struggle to buck stereotypes and learn empathy in this monster’s hilarious lament.

Floyd Peterson is so much more than shaggy purple fur and pointy monster teeth—
why can’t people just see him for him? Jory John and Bob Shea have struck gold in creating a knee-slapping, read-it-again story that will start a valuable discussion about how we treat others and how it feels to be seen as “different.”

JORY JOHN is an author, journalist, and educator living in the San Francisco Bay Area. He is the creator and coauthor of the bestselling All My Friends Are Dead. For ten years, Jory worked as a seasonal camp counselor at a performing-arts and circus camp, where he taught songwriting, guitar, juggling, and writing.

BOB SHEA has over a dozen picture books to his credit, including the popular Dinosaur Vs. series, which he writes and illustrates, and the cult favorite Big Plans, illustrated by Lane Smith. His characters and animations have appeared on Nick Jr., Playhouse Disney, and PBS Kids. Bob spends his days writing, drawing, and having “conversations” with NPR.

Floyd Peterson is sick and tired of being called a monster. “Just because I have horns. And wild eyes. And clompy feet. And long toenails. And crazy hair. And fangs. And a huge, toothy smile that glows in the dark.” That doesn’t mean that he’s a monster. Children really hurt his feelings when they scream and run when he is grocery shopping or simply trying to sleep under a bed. He thinks it’s time everyone learned some manners and called him by his real name, Floyd Peterson. Luckily, by the end of the text, Floyd has finally made himself heard while hiding in a closet. Shea’s signature illustrations with bold lines and vivid colors are a perfect match for the minimal text on each page. Pairing this book with Ed Emberley’s Go Away, Big Green Monster or Jon Stone’s The Monster at the End of This Book will make a fun, interactive monster-themed storytime even more enjoyable. VERDICT A perfect choice for a rollicking read-aloud, library collections, and picture book fans everywhere.— School Library Journal, July 2016 (starred review)

"It’s not like I ever call you names, do I? I could easily be like, ‘Look at that little
meat snack over there.’” A pear-shaped, purple-fur-covered, er, creature speaks
directly to listeners. “I’m no monster! Just because I have horns. And wild eyes.
And fangs…” He might howl, roar, and growl; he could be hiding under the bed
or in the closet—but people shouldn’t be afraid of him. “It really hurts my feelings.”
This not-a-monster’s appearance and behavior belie his message; the cognitive
dissonance between text and pictures is what makes the book funny. Shea’s
kinetic illustrations take full advantage of the silly premise and offer Floyd—that’s
the narrator’s name, by the way: Floyd Peterson—loads of character. Jittery lines
and bold background colors make the pages pop with nervous energy as Floyd
delivers his impassioned defense. He closes with an undeniable point that inadvertently
takes the bite out of his argument: “Yep. I’m a monster with excellent
manners! Um…I didn’t mean…I’m not a…um…” Oops. Pair this with John’s
and Shea’s previous collaboration, I Will Chomp You! (rev. 7/15), to keep those
little meat snacks on their toes. — The Horn Book Magazine (6/3/16)

The creators of I Will Chomp You (2015) are back at it with a tale of another opinionated monster. Only this one would rather not be called a monster. It hurts his feelings. Sure, he has horns and wild eyes, and sure, he howls at the moon, hides under the bed, and growls in his sleep, but come on. He’s simply not a monster (in fact, his name is Floyd Peterson). How about this: if you don’t call him a monster, then he won’t call you “that little meat snack over there.” Floyd, front and center on almost every page, is a fuzzy purple monster—sorry, creature—whose yellow eyes and wide, fanged mouth give him expressions that range from comical to, occasionally, downright scary. In Shea’s signature style, Floyd is often the most detailed thing on the page, standing out against line-sketched, monochromatic backgrounds. The highly energetic text pairs well with the frenetic illustrations, and the read-aloud potential is through the roof. Just keep the name-calling to a minimum, OK? — Kirkus Reviews (5/31/16)