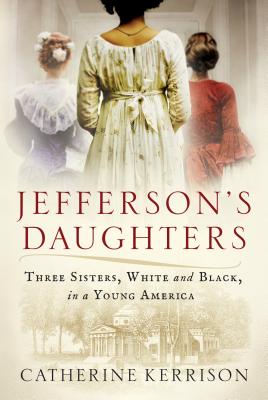 The remarkable untold story of Thomas Jefferson’s three daughters—two white and free, one black and enslaved—and the divergent paths they forged in a newly independent America

Thomas Jefferson had three daughters: Martha and Maria by his wife, Martha Wayles Jefferson, and Harriet by his slave Sally Hemings. In Jefferson’s Daughters, Catherine Kerrison, a scholar of early American and women’s history, recounts the remarkable journey of these three women—and how their struggle to define themselves reflects both the possibilities and the limitations that resulted from the American Revolution.

Although the three women shared a father, the similarities end there. Martha and Maria received a fine convent school education while they lived with their father during his diplomatic posting in Paris—a hothouse of intellectual ferment whose celebrated salonnières are vividly brought to life in Kerrison’s narrative. Once they returned home, however, the sisters found their options limited by the laws and customs of early America.

Harriet Hemings followed a different path. She escaped slavery—apparently with the assistance of Jefferson himself. Leaving Monticello behind, she boarded a coach and set off for a decidedly uncertain future.

For this groundbreaking triple biography, Kerrison has uncovered never-before-published documents written by the Jefferson sisters when they were in their teens, as well as letters written by members of the Jefferson and Hemings families. She has interviewed Hemings family descendants (and, with their cooperation, initiated DNA testing) and searched for descendants of Harriet Hemings.

The eventful lives of Thomas Jefferson’s daughters provide a unique vantage point from which to examine the complicated patrimony of the American Revolution itself.  The richly interwoven story of these three strong women and their fight to shape their own destinies sheds new light on the ongoing movement toward human rights in America—and on the personal and political legacy of one of our most controversial Founding Fathers.

Catherine Kerrison is an associate professor of history at Villanova University, where she teaches courses in Colonial and Revolutionary America and women’s and gender history. She holds a PhD in American history from the College of William and Mary. Her first book, Claiming the Pen: Women and Intellectual Life in the Early American South, won the Outstanding Book Award from the History of Education Society. She lives in Berwyn, Pennsylvania.

“A richly textured and satisfying book . . . a striking portrait of how women in Jefferson’s era lived, bravely and resourcefully, in an age that demanded fealty and absolute obedience to men.”—Newsday

“Intriguing . . . The most poignant literature gives a voice to the voiceless. And in Jefferson’s Daughters . . . Catherine Kerrison tells us the stories of three of Thomas Jefferson’s children, who, due to their gender or race, lived lives whose most intimate details are lost to time. . . . A highlight of Kerrison’s work is that while noting the gender constraints that hemmed in white women, she does not sugarcoat their privileged status, nor deny their racism. . . . A historical narrative that allows us to reflect on the thoughts, fears and motivations of three women coming of age in a turbulent time, Jefferson’s Daughters offers a fascinating glimpse of where we have been as a nation. It is a vivid reminder of both the ties that bind, and the artificial boundaries that painfully divide us.”—USA Today

“Kerrison’s book is a valuable addition to the history of Revolutionary-era America as well as a reminder of how many of its promises have yet to be fulfilled.”—The Boston Globe

“Absorbing and affecting . . . Like all great histories do, Jefferson’s Daughters brings its period vividly to life, a credit to Kerrison’s exhaustive research, her passion for her subject, and her elegant writing.”—The Christian Science Monitor

“Much has been written about Thomas Jefferson, his family and his illegitimate daughter, Harriet Hemings. But historian Catherine Kerrison eloquently manages to shed new light on the Founding Father and his relationships with three of his very different children. . . . Although Jefferson promoted individual liberty, he contradicted this endorsement by owning slaves. Kerrison writes about this contradiction with thoroughness and candor, piecing together massive amounts of research, including letters, journal entries, financial accounts and commentary from family descendants. In meticulous detail, her knowledgeable yet conversational style makes Jefferson’s Daughters a thought-provoking nonfiction narrative that reads like a novel.”—BookPage

“Drawing on letters and journals, Kerrison presents an intimate portrait of a powerful man and his daughters through their respective paths to womanhood at a time of change and tumult that nonetheless held to racial and sexual restrictions.”—Booklist

“Incisive and elegant, [Catherine] Kerrison’s book is at once a fabulous family story and a stellar work of historical scholarship.”—Publishers Weekly (starred review)